Liam Andersen is a mixed media artist from Denmark, now based in Greece.

He is currently working on recreating photographs of his family and his upbringing into oil paintings. As he states, this method allows him to capture the poetics and emotions that these memories evoke in him, allowing balance between memory and imagination.

From the artist regarding the project:

“Until I was Born” tells the story of my parents, from when they met until I was born, through oil paintings that are based on recreations of photographs as well as their oral accounts as they were handed over to me throughout my upbringing. It is a story of a young and idealistic couple who fall in love through a commitment to create a life together free from the individualistic and isolating reality of the neo-liberal market society of Europe since the late 1970s.

From the squat scene of Sankt Pauli and Reeperbahn in Hamburg, to the drug infused raves of Goa in India and experiments with communal lifestyles in various parts of southern Europe, this piece tells the story of the life of my parents as travellers who lived on the road in a bus converted into their home, before I was born and they became parents; before they became pregnant and were confronted with the question: How can our lifestyle, our dreams and our aspirations, be compatible with the safe upbringing of a child?

It is a story of sacrifice and compromise. Eventually deciding to settle down, and once again confronted with the meaningless life in a capitalist modernity, the piece captures the crumbling of my parents’ relationship and my father’s sinking into depression.

After years of pain, the result is a divorce; I was born into this moment of pain, this moment of rupture. The only glimpse I would ever come to know of a harmonious family would be through the thousands of pictures that capture those years before I came into being, and everything changed. 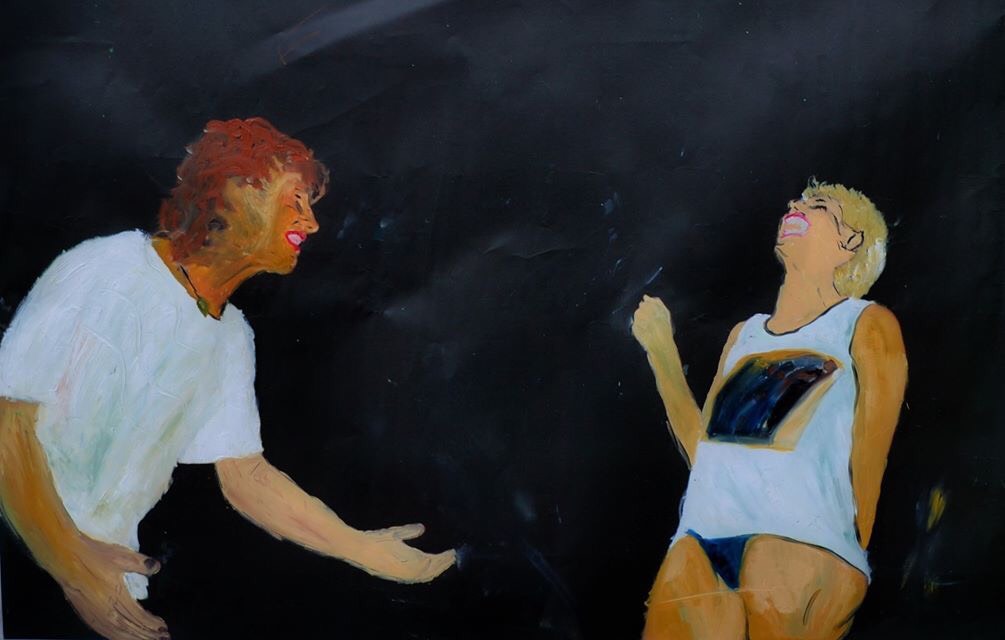 – Going through your parents’ photos, what was your immediate reaction and emotions to these moments?

Going through my parents’ photos was a long and often emotional process, one that
answered many questions but also raised many new ones. A lot of the pictures were
connected to stories I had grown up with, stories that I had been fascinated by as a
child, stories that have become part of my identity, and so in that sense the pictures
have also evoked a sort of sense of belonging, a feeling of home.

I grew up with these pictures and these stories, and since I was a teenager I have had them plastered over my walls, carried them with me everywhere. I always found them beautiful and very aesthetic, but I have come to realize that I had romanticised the stories behind the images. To engage with them artistically has given me the opportunity to view them with a more critical lens, allowing me to better understand where I come from and how that has shaped my identity and why I have ended up on a very similar path today.

– This is going to be your first exhibition. How do you feel about that?

I am extremely excited for the exhibition. I am excited to share my art with a wider
audience and I hope that it will be an opportunity to open up for new paths for the
artistic process to grow and to allow it to take new forms and directions.

– For the current project, “Until I was Born”, your inspiration is your family. But are there any artists or anyone from your environment, who influence your work and your artistic style?

I am a big admirer of Apolonia Skool and her art has been very inspiring and important
to me. The sensation her art gives me is similar to the feeling of disappearing into an
amazing piece of literature. The way she portraits her characters is incredibly strong and
I am very moved by how her love for the people she works with comes across through
her art. I am also a sucker for portraits that are located within the mundanes of every
day life. The normality of the setting can function almost as a window into something very powerful between people.

– What other mediums do you use for your art?

I love working with oil chalk. I have developed a process that is very physical, and one
that allows for a lot of spontaneity. It’s a very simple process, but it’s very therapeutic to
me, almost cathartic at times.

Firstly, I cover a large piece of canvas (90x70cm) with a thick layer of chalk, a long and intensive process, often so violent that my fingers will start to soften and blisters will appear. When the entire canvas is covered in a layer of oil chalk, I draw on the canvas by carving it with a knife.

It’s a very long but very meditative process. I find this method exciting because you are presented with a completely different set of challenges but also opportunities, such as learning how to use a knife as a tool in the creation of a painting.

– Currently, you are focusing on your project “Until I was Born”? Are there any other projects under consideration as well?

“Until I was Born” is still an ongoing project, one that doesn’t have a fixed end point, but rather I see it as an emotion that I am still exploring, open to see which new places it will take me. It is a part of an interconnected exhibition, so the next step is to work
on a continuation, a project which I have titled ‘Mom and Dad, We Survived’.

This project is a video piece consisting of footage I have created since 2017, documenting my life and journey with a former partner of mine. It’s a multimedia project consisting of
video, writings and photographs. The video piece begins one harmonious summer, with
two 19-year olds riding their bikes through the woods in Denmark, two days before
leaving their house, jobs and lives behind for the next two years. The experimental video footage consists often of only fragments, but through the fragments the viewer is
taken on an intimate love story between a young couple travelling through Palestine
and Morocco, Chile and Argentina, and the south of Europe, where the relationship
ends when one of the protagonists becomes deeply involved with the radical left
subculture of Greece.

This piece is themed around love and the desire to make sense of oneself by revisiting and exploring the rivers from where one’s identity and self-narrative sprung.

The piece is a follow up to “Until I was Born”, and it explores the same issues, themes and cultures only 20 years later through the lens of my own tragic and fantastic love story.

Keep up with Liam’s work: